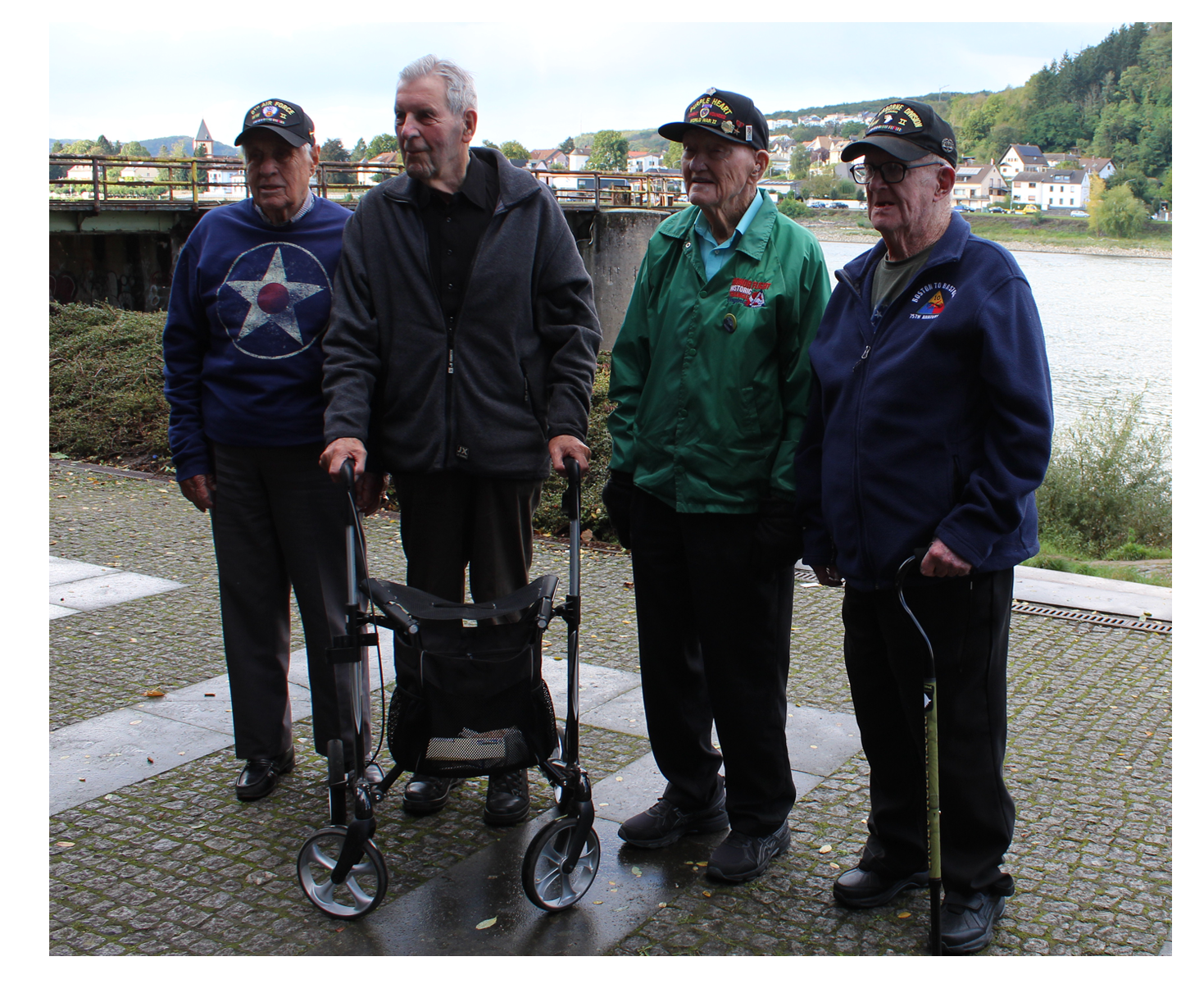 Veterans meeting
US veterans and contemporary witnesses visit us again and again. There was also an emotional meeting on September 30th, 2021, when US veterans found themselves in Germany for the first time on the trail of their own history. For the very old former US soldiers, there was an enormous dumbbell program to complete and yet they took the time for "the bridge". They tried to locate the former flag positions or exchanged ideas with the contemporary witness Mr. Tegethoff, who had traveled specially.

Here you can find some more informative videos about the veterans, their history and the reconciliation:
> Press article (english/external link) 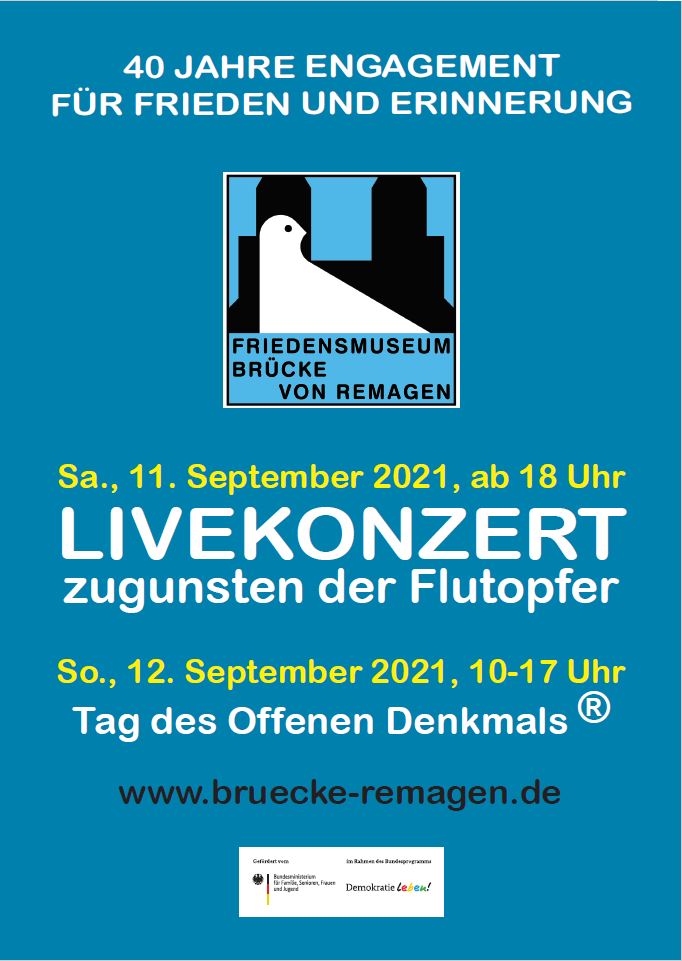 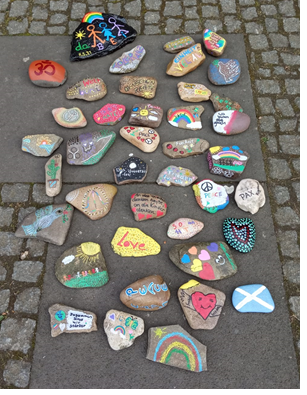 May 8, 2021. The participatory action "Peace Stones" on the day of liberation from National Socialism received a great response. More than 150 stones were placed at the bridge of Remagen on May 8. Children and adults had painted many different motifs for peace and friendship and placed them in front of the Peace Museum. Not only pictures but also sayings decorated the stones: " This is a peace stone. For thousands of years it lies peacefully in the sea and river. This is how peaceful the world should become. Our all wish!"

Galeria and more to read... 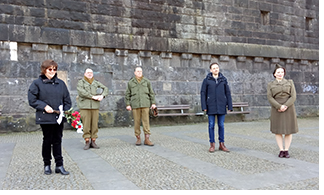 Laying of a wreath in remembrance

On the occasion of the 29th anniversary of the serious accident on April 11, 1992 at the Chapel of Peace with the Black Madonna, members of the Board Peace Museum, Bridge of Remagen e.V., laid a wreath in memory of the victims on Sunday. 80 believers of a pilgrimage group of the Catholic parishes "St. Peter and Paul" from Remagenand "Johannes Nepomuk" from Kripp had celebrated a service at the chapel late in the evening, when a heavily intoxicated 22-year-old man from Unkelbach had crashed unbraked into the praying crowd. 4 people lost their lives and 13 were injured. 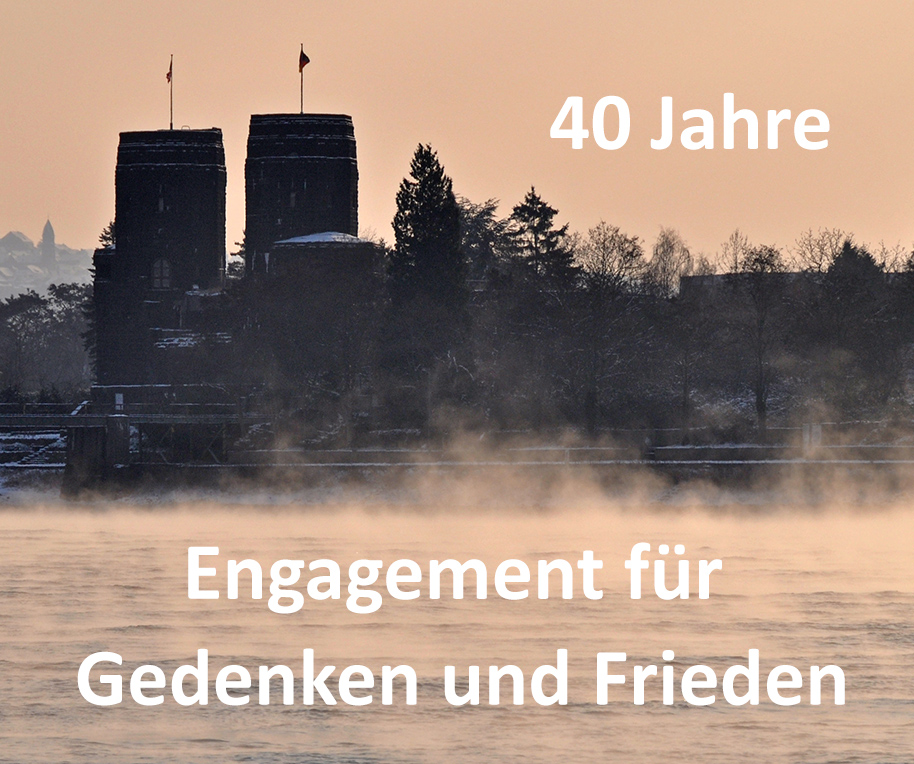 Remagen, 14 January 2021: Today there is a reason to celebrate. Exactly 40 years ago, on 14 January 1981, our association was founded by former mayor Hans-Peter Kürten. Many have accompanied the association for decades and have been committed. Since 7 March 1981, the association has been running the Peace Museum in the Bridge Towers in Remagen and all those who have been involved can be proud of the development of this historic site. More than 800,000 guests from all over the world, from Oceania, Asia, the USA to Europe have visited the exhibition so far. For the many contemporary witnesses of the Second World War and their relatives, commemoration is important. In the visitors' book, the visitors emphasise the idea of peace and many write "Never again war!". Especially our present time shows us again how important it is to work for peace. 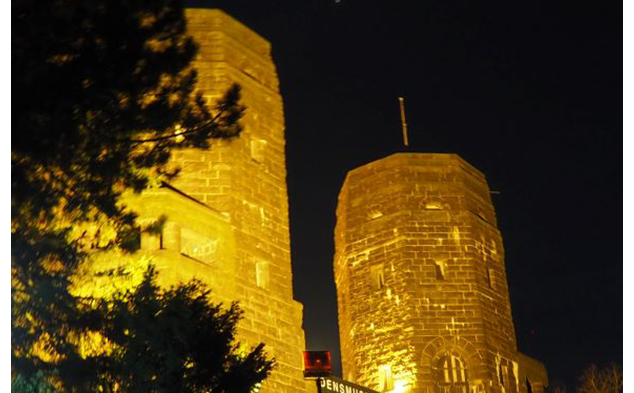 Yes, it is shining again. After an extensive search, we were able to find and fix the faults in the exterior lighting of the bridge towers. Just in time for New Year's Eve, the towers are once again shining in impressive light at night.